Late last week I set up home base on Island lake in Manitowish Waters while I made a winter waterfall photo circuit in northern Wisconsin and Michigan. My goal was to spend a couple of days shooting some off the area waterfalls. Little did I know that there would be “death defying acts” as part of the itinerary.

My first stop was Superior falls on the shoreline of Lake Superior. It’s located slightly north of Saxon Harbor and during this time of year is extremely less traveled. At 6:45am GPS told me that I had reached my location but the icy backroad that I was on told me different. I back tracked and eventually found the entrance.

Following the path to the falls I came across a ten-foot-wide section that resembled an old dirt road. The 70-foot decline that led to the base of the falls/Lake Superior shoreline was solid ice and in no way was I going to attempt that hike. Looking for a possible alternate solution I found that a heavy metal cable had been embedded in the ground and could be used as a railing.

So, I sat down, grabbed the cable with my left hand and slid all the way to the bottom. Getting back up was another issue but I’d tackle that when I returned.

The silence was overwhelming and once again made me appreciate the peacefulness that nature has to offer. I was fortunate to catch the sunrise and spent an hour sitting on a block of ice, taking in the beauty of a calm Lake Superior.

It was another 10-minute walk to the falls but they were completely frozen over, so I explored the base for a while and then headed back to the icy path. The only way I could figure to get back up was to kneel and use my upper body to pull myself along the cable line. It actually worked pretty well but my arms disapproved the following day.

On to Saxon falls…..

Located on the Montreal River, Saxon falls is only a few minutes from Superior falls. The falls sit in a deep gorge which I found was not easy to get to, at least not in the winter.

The journey started with a 50-foot eighteen-inch-wide footbridge over the river. The floor of the bridge had a 2-inch snow base on top of solid ice. Horrible conditions for crossing and based on lack of footprints it looked like I would be the first in a while. Thankfully the steel cables on each side of the bridge provided something to hold on to. After crossing the river, I found an additional 75 yards of bridge to hike before making it to the top of the gorge. Every step took about five seconds to ensure that I had a secure grip. I typically like an adventure but this was a bit nerve wracking.

When I reached the end, I found an 8-foot metal ladder that I had to crawl down only to find another ladder a few feet away that led back up to the continuation of the foot bridge……..of course the ladders were ice covered.

After scaling the second ladder I came to a small deck with a very long metal staircase. The staircase dropped deep into the gorge and I estimated it to be about 100 feet. I couldn’t tell if the staircase had a thin coat of ice on it so I decided to make my first common sense decision of the day and stay put. Slipping and falling on that staircase would have been disastrous.

I could see the falls from the deck so I got out my 70-200 zoom lens and photographed it for 15-20 minutes before heading back across the footbridge.

I spent another few minutes shooting the water flow at the Saxon dam before heading to Potato falls near Gurney.

Potato falls was easy to find, located off hwy. 169, outside of Gurney, WI.

Once there, you have the option of hiking to the upper falls or lower falls. My first choice was taking the path that stated “trail closed”. I soon realized how serious the sign was when I came to a 75 foot drop straight down where the earth had just eroded and fallen away.

I then chose the lower falls and once again was faced with long stairways of ice covered steps. Made of wood and slightly less treacherous than the metal stairs, it was still a decent 20-minute hike to the base of the falls.

Hiking to the edge of the river, I found that it was half frozen but running freely. I hiked up stream but could not get to the base of the falls without walking across the ice, not something that I was willing to chance. I realized that I was now standing directly below the closed trail where the ground had eroded and soon began to see and hear rocks and dirt fall all around me. I am sure that the waterfall is spectacular during the fall, but on this day it was not worth hanging around for and possibly being buried in a landslide. I walked back downstream and took a 30-minute rest to enjoy the sound of running water before heading back up to the top.

Rain moved in and ended my day but after several hours of climbing I was ready to head back to home base.

Up the next day at 5:30am and off to Bond Falls. Another overcast day so I wasn’t counting on much color. I had decided early on that I wasn’t going to spend much time photographing the waterfall itself. Anyone can do that, so I focused on more of the intimate features of water flow and ice. 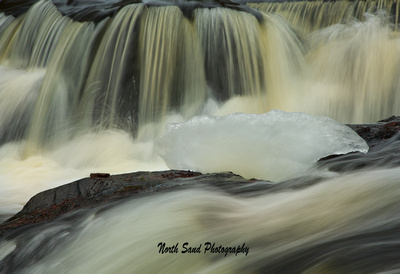 Bond falls is located in Michigan’s UP, just east of Paulding, MI. It is an impressive waterfall and considered to be one of the best in the area. It is well worth the trip and I am sure it gets a ton of visitors during the summer. Today I was the only one there. Due to the closed road I had to park about half a mile and hike in, which was fairly easy.

The base of the falls is surrounded by a boardwalk that provides for easy viewing. Getting to the top of the falls was a little more difficult seeing as that the stairway was completely ice covered and non-existent to the naked eye.

With the stairway out of commission, I used some trees for leverage to get me to the top. Looking upstream, the river is made up of numerous cascades and rapids. Although snow covered, the paths upstream were easy to navigate and got you up close to the edge of the running water.

I spent 5 hours there and never saw another person, in fact I never saw anyone at any of the places I visited…..just how I like it.

On my way back to the entrance I hopped over a dead tree, caught my cargo pants pocket on it and ripped a huge hole in my pants leg. I didn’t think anything of it until I got back to the truck and realized that I had lost my driver’s license, debit card and some cash.

So, it was back into the park, re-tracing my steps to the tree, hoping to find my stuff. Fortunately, it was another windless day and I soon found my cards and money sitting under the tree that had taken out my pants leg.

Back at my truck the rain started and once again ended my day.

During my three-day trip, I took about 125 pictures and wasn’t overly excited with any of them, but the adventure was amazing……and in the end, that’s what it’s all about. 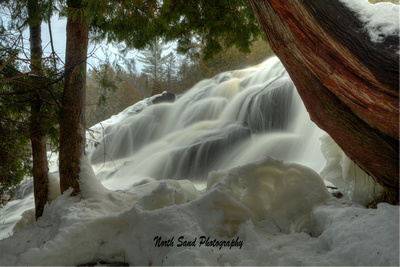 Joy feeley(non-registered)
Hi Mike!
So glad you're home safe and sound! You sure do take risks for the sake of your art and it is well worth the result. My partner, Miguel who's an amateur photographer, enjoyed reading about your venture to the falls. We both thought that the last photo at the bottom right of your blog post reminds us of a painting style of Monet - beautiful! So enjoy your photos and reading about your adventures!
Fondly,
Joy (Joyce Schadek) Feeley
No comments posted.
Loading...
Subscribe
RSS
Recent Posts
Sleeklens Review Winter Waterfalls…..and Death Defying Acts Photo Workshops are for Beginners too Door County, Abandoned Farms and Neutral Density Filters Sleeklens lightroom workflow review All is good in the world California's Eastern Sierra Night Skies, Dark Woods and Wildlife Hiking up the Black River Cold Morning-Making mistakes
Keywords
wisconsin Door County workshops michigan photographs waterfalls Beginner photo Filters
Archive
January February March April May June July August September October November December
© North Sand Photography
Powered by ZENFOLIO User Agreement
Cancel
Continue